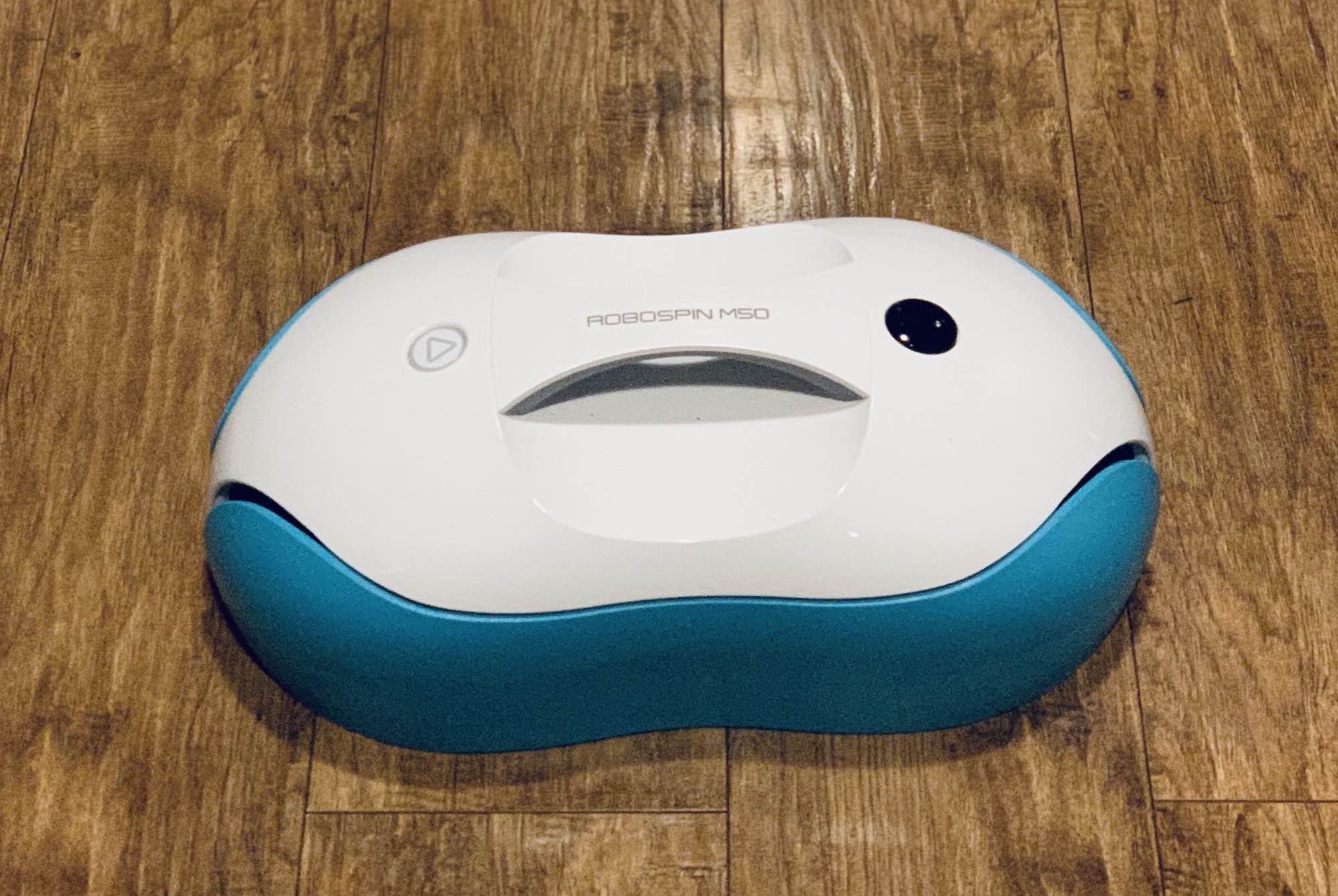 Mopping is one of my least favourite activities, but its a necessary one. While Ive got a robot vacuum to take care of the dust and dirt, I havent found a robot mop that could really clean the floors. Imagine my surprise when I tested out Robospin, an automatic mopping robotic cleaner, and discovered that it actually lifts stuck-on dirt.

Robospin is a dual-spin mop with multiple cleaning modes. It doesnt work with an app, but theres an included remote control you can use to switch modes, stop, or pause. The design of the mop reminds me a lot of an electric toothbrush head or a tool youd use to buff the wax off a car. It spins across your floor, twisting and turning until your floors are clean.

I never thought a robot mop would be able to take on my floors, but Robospin can. Heres a look at how it works and what I thought of Robospin Automatic Mopping Robotic Cleaner.

Appearance and features of Robospin 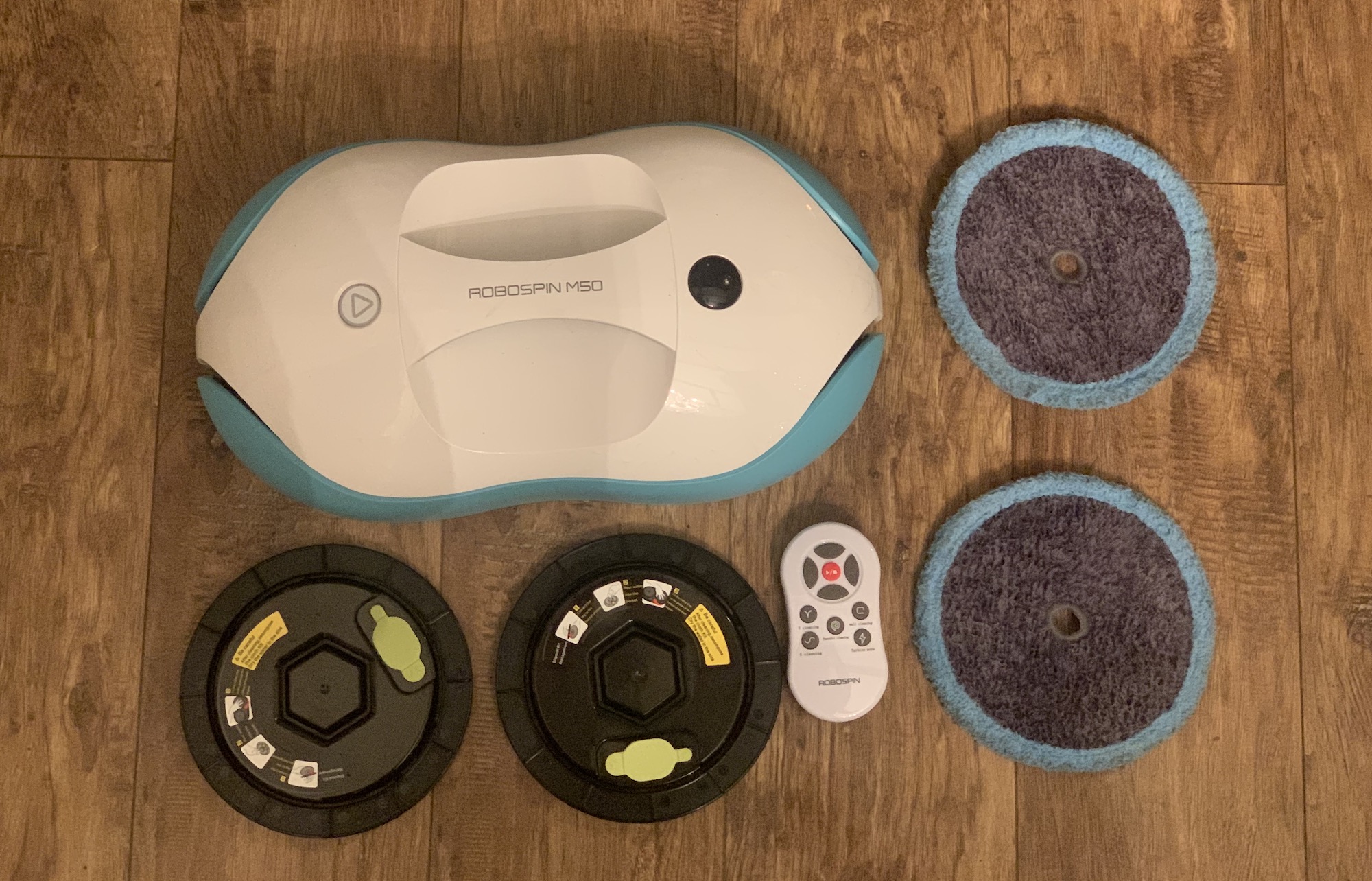 Robospin looks like a robot, with a small, lightweight plastic design. Its only 6 and a half pounds, so its definitely not heavy. On top of the robot are a sensor and the power button, and on the bottom are two clip-on water tanks and an on/off switch.

How to set up Robospin 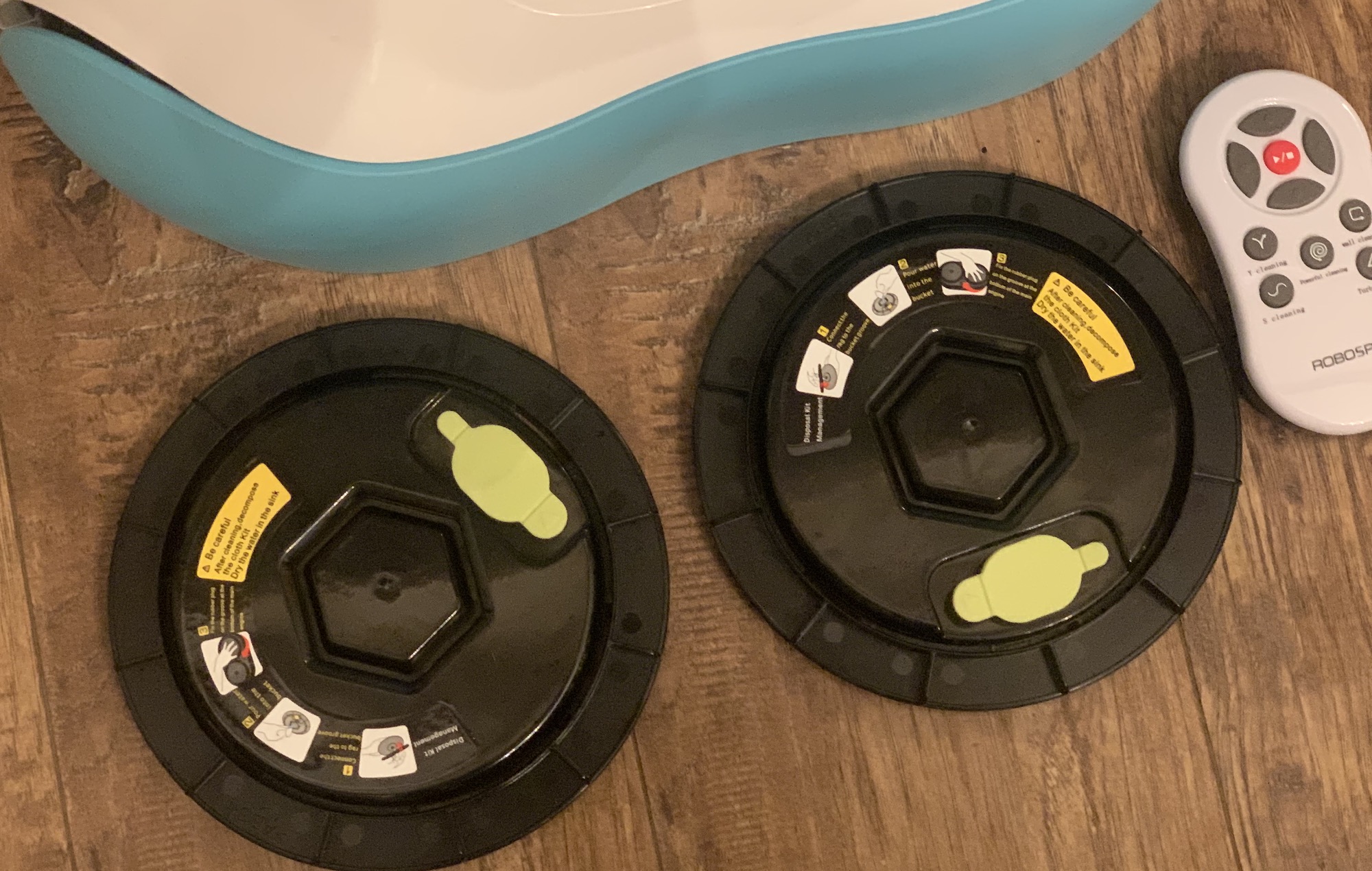 Robospin comes with a charger, two water tanks that attach to the base of the robot, two washable microfibre pads, and bumpers you can use to ensure the robot doesnt harm your furniture if it bumps into it.

To use Robospin youll need to fill up the water tanks and attach them to the base of the robot. They just click into place. Once they are attached, you pop one microfibre pad onto each. Just be sure to run the microfibre pad under water and squeeze it out before you attach it.

Youll have to charge Robospin for 100 to 150 minutes before you use it for the first time. Theres an on/off switch on the bottom, and then youll tap the button on top of the robot. When its blue, youre ready to mop. 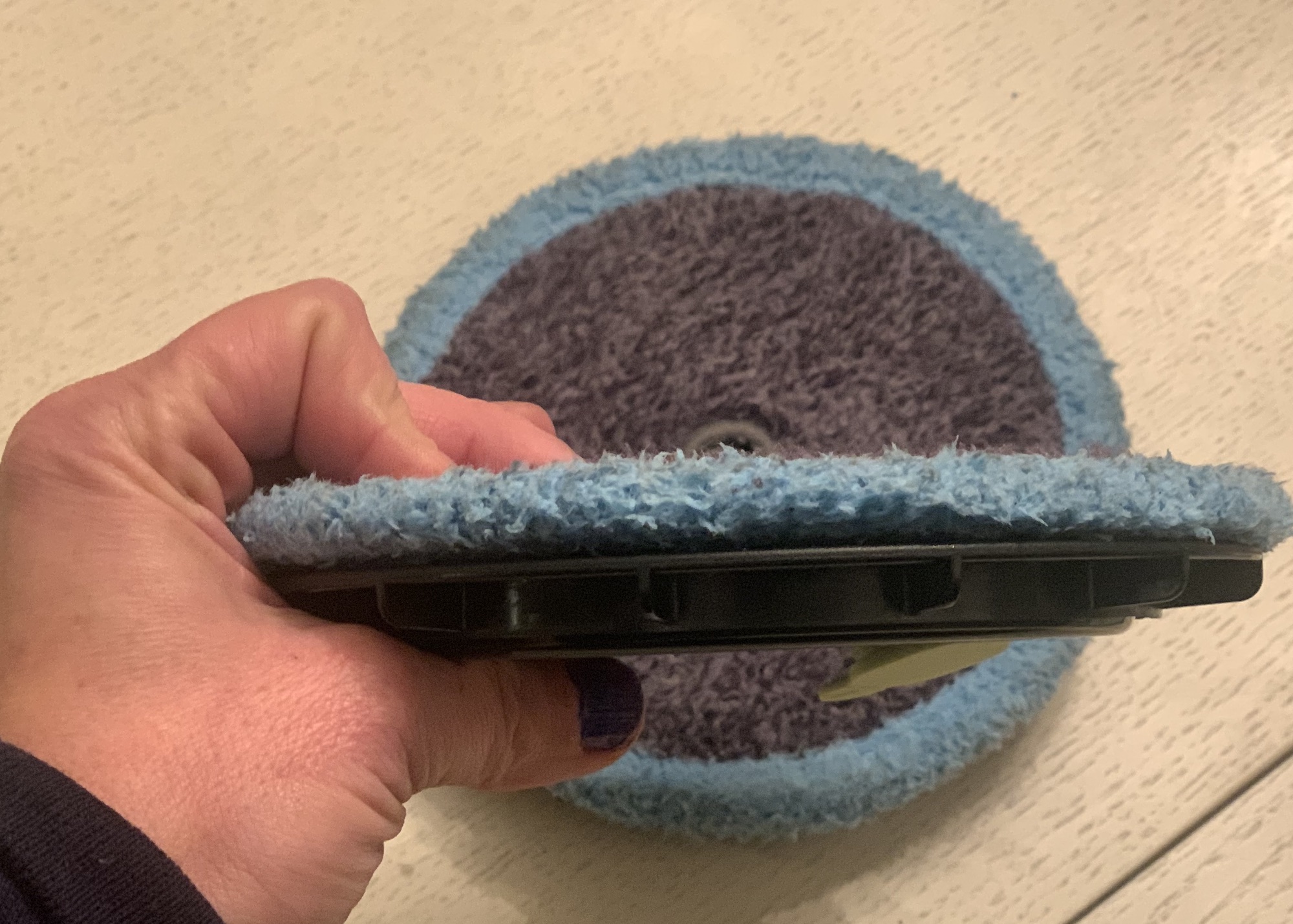 Ive tested out floor mopping robots before. While they will definitely do a great job of wiping up dust, they wont clean up a mark from shoes or something stuck to the floor. I usually do a pre-clean before I turn on a floor robot of any kind so I can be sure they do a good job.

Thanks to Robospins unique design, it has the power to actually scour your floor. The first time I turned it on I was really surprised at how it started spinning. It soon became clear that the spinning is what gives this floor cleaning robot an edge.

Choosing a cleaning mode via the remote control 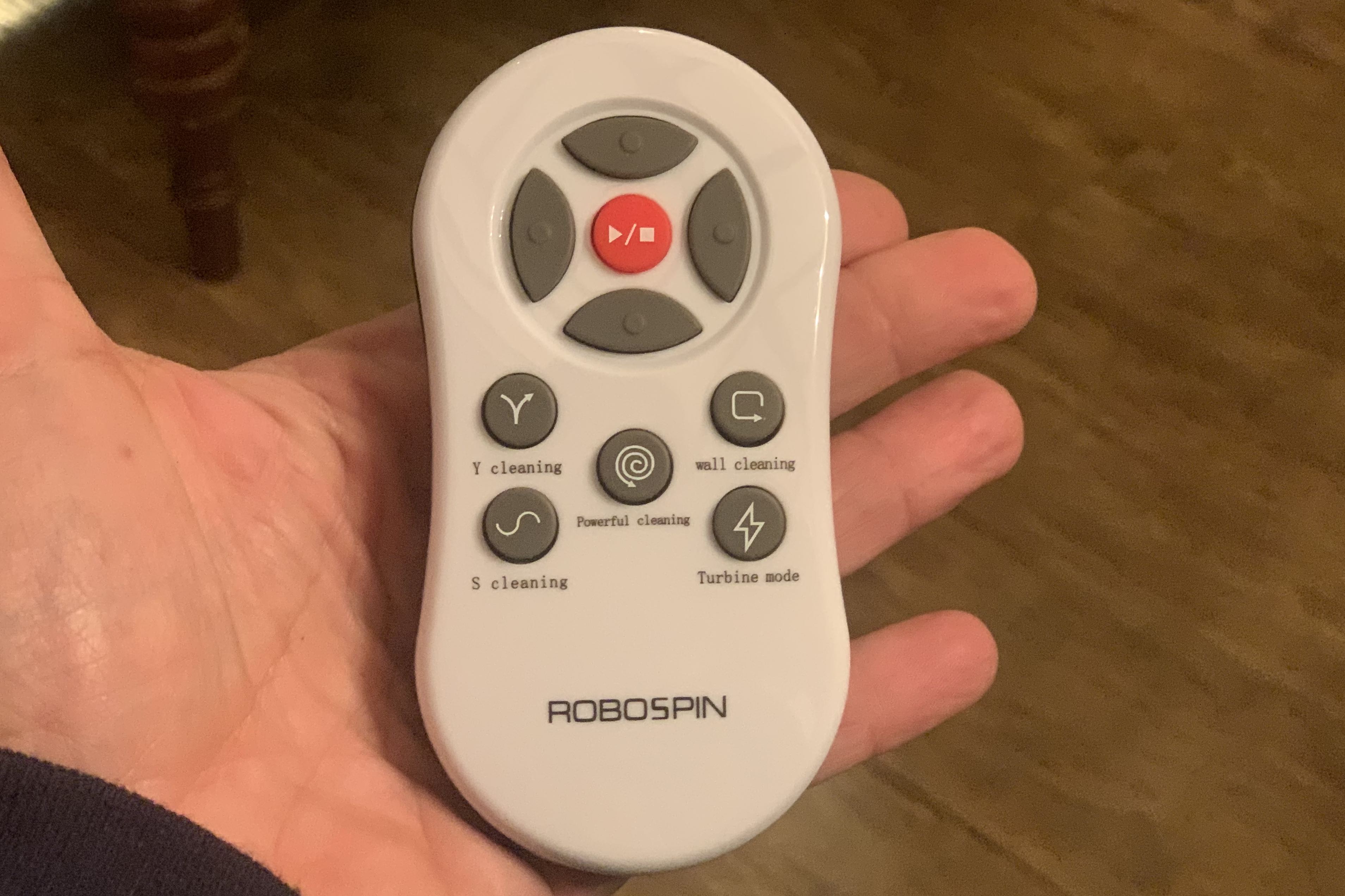 You can just tap the power button to turn Robospin on, but if you want to use any cleaning mode other than the starting mode, youll need the remote control. I started off in manual mode and tested out every mode Robospin has. Turbine mode was a favourite, because it kicks the motor into high gear and Robospin really gets into cleaning. The only downside is your battery wouldnt last as long if you kept it in Turbine mode.

I used manual mode with the remote control to manually move Robospin to a spot I wanted it to clean. Its a lot like operating a remote control vehicle. Its not like a robot vacuum that maps out your home, but it does use its sensors to sense furniture and other objects and either clean along the edges or move away from them.

The edge cleaning mode did a pretty good job along my floor by my cabinets, but it couldnt fit right up against the kickboards. It did a great job under my table though, and it really gave my hallway a good cleaning. 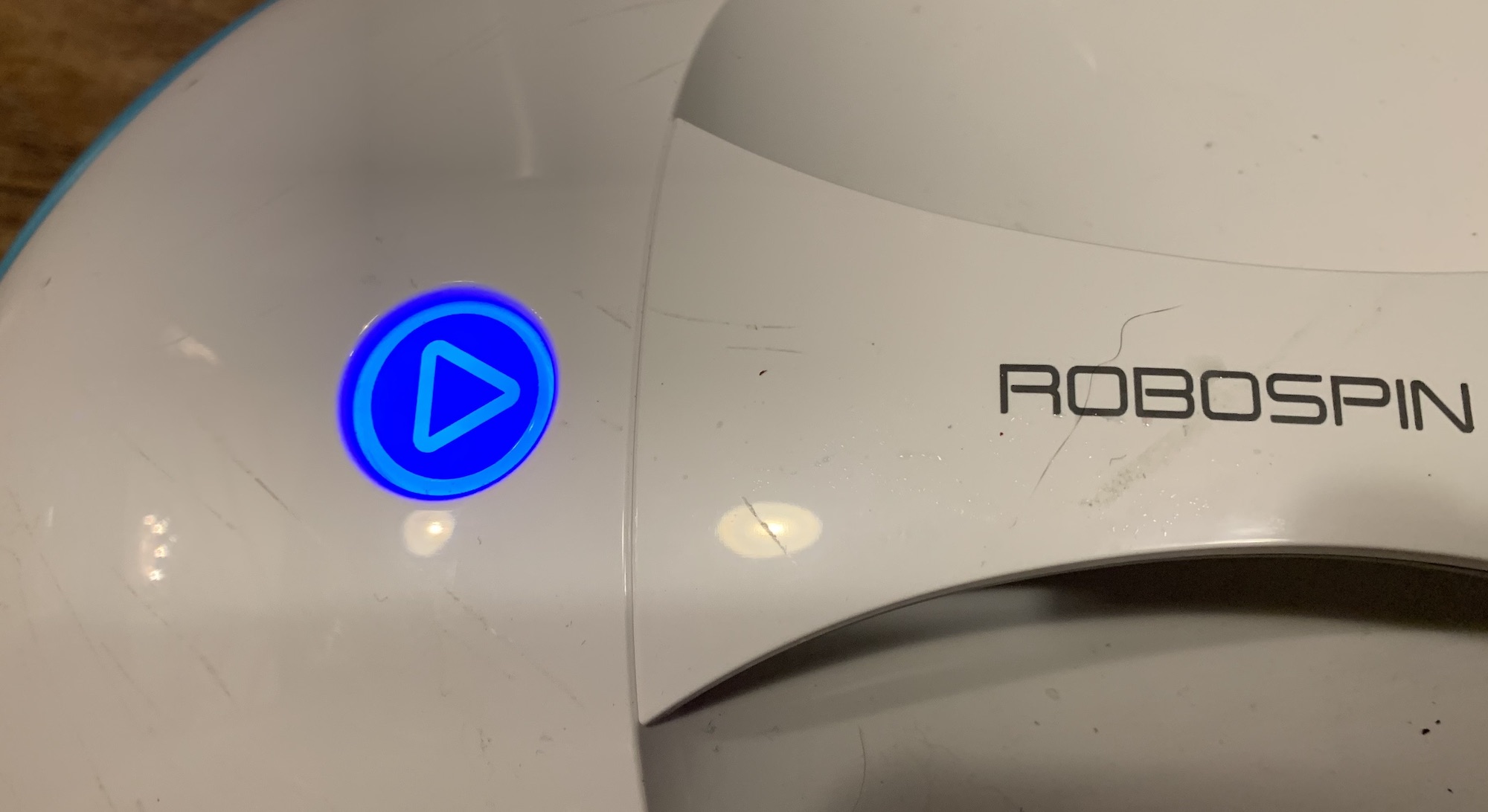 I had purposely left some big dirt marks on the floor for the Robospin to take care of. As it spun over my floor and cruised from spot to spot, it actually lifted the marks up. One of them was pretty stuck on so it took a few swipes at it, but the spinning and scouring action was what lifted them up.

Robospin didnt leave a dirt trail behind after it cleaned up a dirt spot. The microfibre cloths were enough to wipe up whatever dirt there was so the floor it left behind was clean.

How long can this robot mop your floor?

I plugged Robospin and let it on the charger for several hours to ensure it had a full battery. Once I had it cleaning, I turned on my stopwatch and timed the battery on it. While the battery is supposed to last around 100 minutes, my Robospin didnt stop cleaning for 2 hours and 15 minutes. Thats really impressive, and that was more than long enough to clean all the floors in my house.

The only time Robospin stopped was when it tried to roll over a transition strip from my hallway to my bathroom. It must have felt like a ledge, so it stopped and beeped at me.

Cleaning up after mopping

Should you buy a Robospin floor mopping robot? 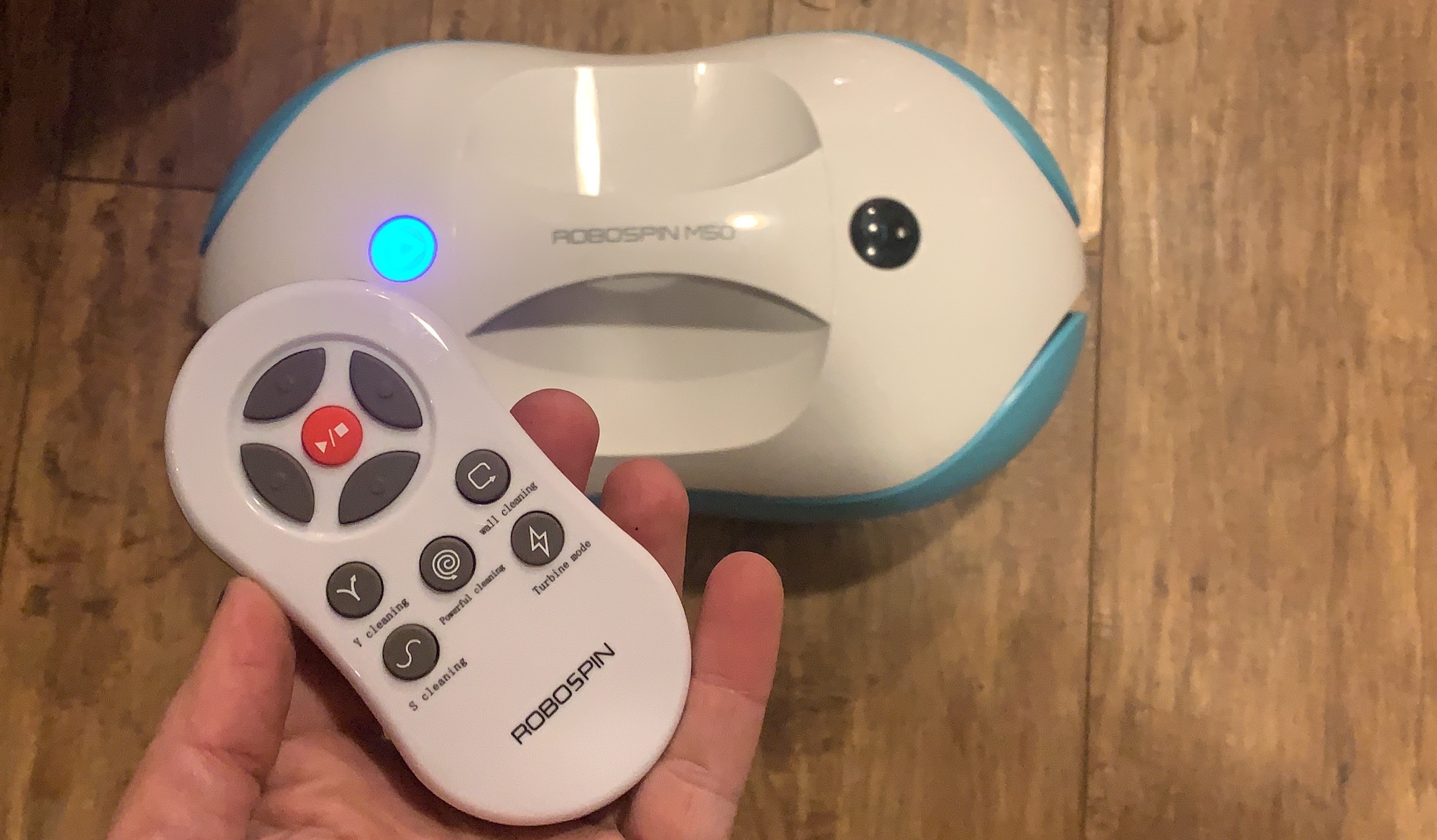 Id never heard of Robospin before I tried it out, but I was really impressed with this floor mopping robot. It really lifted the dirt, and with all of the cleaning modes, youll be able to choose a method of cleaning for every floor type.

The spinning brushes are great at scrubbing, and even after an hour there was still water left in the tanks to keep cleaning the floor. It was the battery life that impressed me the most, and Im still surprised it managed to keep cleaning for over two hours.

It doesnt have an app to operate the robot, but the remote control is easy to use. I also really like how you can re-use the microfibre pads so you wont have to go out and buy replacement pads all the time.

Overall, I thought this floor mopping robot did a great job on my floors. It keeps them clean, and you dont have to spend the time to do it yourself. Thats a huge help in my opinion.

You can find Robospin on Best Buy right now.