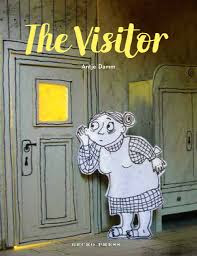 I said that last week's #ReadItTorial would probably be my last, but I didn't really want to write a final one on a sour note.

Most of last week's #ReadItTorial was pretty damming and I had a lot of time to reflect on what I'd written, and also a lot of time to consider that the problem may be widespread amongst larger multinational publishers (the problem being of publishers 'hanging on' to best-selling authors and samey 'safe' themes and story types) but it's definitely not the case amongst small print run independents.

This is the weird thing for me, as a complete outsider to the industry with no real direct line of contacts within, just an outsider's observatory view of the way it all seems to 'work' and the frustration of how it's becoming stagnant.

I'd expect indie publishers to be more risk averse - ie less prone to taking chances on titles that may end up having a fairly narrow audience. Yet it doesn't seem to be the case, in fact indies seem to be the sole hope I have that the industry won't collapse in on itself.

Last night, while in the throes of insomnia (which I suffer from regularly) my mind was churning over the whole problem, and also likening it to what happened in the late 80s and early 90s in the music industry. Back then (and in some ways it's going through it a bit now as well) the charts were dominated by hits from large record companies, often dreadful over-produced tat, or reissued classic songs sung and performed by folk you'd rather run through a wall of fishhooks to get away from than hear ruining a song you previously loved.

When I was a moody youngster I started trawling through record shops looking for more obscure stuff (yeah everyone loves to think that they're so 'edgy' that they listen to stuff that no one else has ever heard of or likes) and it struck me that this feels a little bit like what's going on in children's publishing at the moment.

As a particular trend emerges, the big publishers press-gang their 'chosen' writers to knock out a few titles based on that trend. We've seen it again and again over the course of blogging about children's books for the last ten years, and I sometimes feel that the various book fairs are to blame - almost like the biggies go round the fair, look at what everyone else is doing and then churn out their own versions or variants of those books.

Mighty girls, books about plastics in the ocean, books about anxiety and mindfulness, books about race issues and equality - these are all vital subjects of interest to kids, and yet whenever one hits the news or becomes a high-profile subject for protest or media coverage, the books seep out like woodlice crawling out of a piece of rotting wood until your local bookstore is utterly and completely saturated with them, and kids (and their book-buying parents) are left with little or no clue which is worth spending their money on.

In some ways this does actually prop up the argument that there isn't enough official review coverage of kidlit, certainly not enough critical coverage that would highlight the strengths and weaknesses of a particular title. Amazon reviews and Goodreads (held up by most book folk as the only yardstick to measure a book's worth by, just let that roll around in your head for a moment or two) have now become where most consumers will look for a book's worthiness (I've lost count of the amount of times we've said no to folk who've asked us to 'double up' our reviews by writing them on both of these too - what on earth would be the point in trying to run a blog if you're just going to put the same review up in two other places as well - let alone the time it would take to do so).

OK I promised a way out of the mire. Perhaps some of these ideas would work, or are at least more worthy of debate. Some may even exist so don't be shy in pointing out what I'm missing if I'm missing it - after all I'm just a dad writing about books with his daughter on an increasingly part time basis, my knowledge extends to what you see in this blog.

1) A site that captures a whole slew of reviews, ratings and opinions on books. I'm thinking something that is the booky equivalent of gamerankings - something that brings together reviews and perhaps even a rated percentage. I once considered doing this but realised that as a one man band it'd end up being a huge undertaking. I know a few sites (like the awesome Toppsta) do get close to providing a good broad range of reviews but would love to see something that, say, trawled the top 100 book blogs and worked out a percentage rating based on opinions on reviews (the only problem there is that most bloggers - like us - don't give books marks out of 5 or anything).

2) Be more risk averse. Particularly larger publishers. Consider that you might feel that a book might only have a niche audience, but with the right coverage and promotion even niche titles can become massively popular (stuff promoting celebrity books or books by long established authors who really
don't need hyping)

3) Cast your net wider than the usual suspects. One of the reasons I included a Gecko Press title in the header image for this article is that over the years they've done an excellent job in translating and bringing in a huge range of international authors and illustrators' books to the UK market, gorgeously presented and featuring stories that feel so different, fresh and original to the usual boring samey old books we're all getting a bit tired of.

4) As with the ratings site, consider ways to increase your book's profile amongst teachers and librarians. Again I had a crazy idea that if we didn't continue with ReadItDaddy, I would dearly LOVE to do a blog that could help teachers and librarians pick out books for schoolkids to suit the various stages of a child's literary education. The only problem is I really don't have a clue how to objectively classify books as suitable for specific stages (EYFS, KS1, KS2 etc). Part of the problem there is that to me, I can only base a recommendation on what my own child is or was reading at a particular age but obviously there's a lot of wiggle room in ability for each child as a reader. I would love to see this happen and I know a lot of teacher-run / school librarian run book blogs are an excellent source for this stuff. You can't rely on the government or official educational bodies to get this right but it feels like it would be such a huge win both for publishing and for teaching.

5) Relax the rules for new authors. I'm not saying that publishers should just let any old unedited tat fly, but I think that there are so many obstacles in the way for new authors, and part of the problem stems from the harsh set of rules that need to be adhered to. The industry may well have economic reasons for insisting that new authors fit their books to those rules, but it does stifle creativity, and means that most dedicated unpublished authors spend so much time paring down texts or trashing ideas that would probably work quite well if they were given a little more slack.

These are just a few of my naive ideas. On the positive flip side to last week's post, most of the #Booky100Keepers we listed recently came from small run or indie publishers, though these days it's so difficult to keep track of who has been soaked up by a bigger publisher, which imprints belong where etc. There are publishers out there who are dedicated to stamping out a unique brand for their books, and often that brand is changed frequently to genuinely reflect the constantly shifting trends and changing tastes of book consumers. Sadly though, as we said last week, some just don't get it, and usually they're the ones making the most noise and garnering the most press.