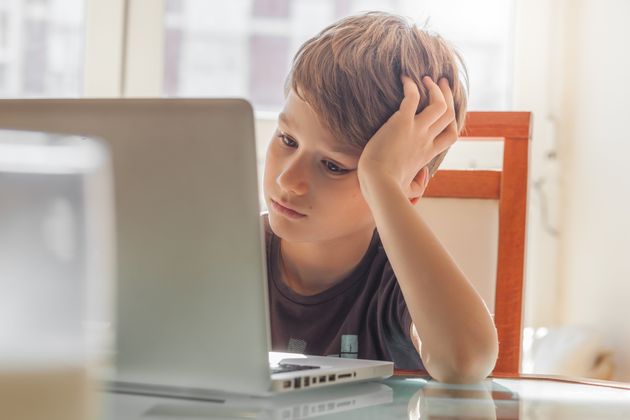 In the past month, my 5-year-old has gone from being excited about video calls for school and virtual “play dates” to basically hating it all. Sometimes he’s into it — like yesterday, when he was totally engrossed in a 30-minute class with his teacher and six friends. More often, he whines and mopes beforehand, then immediately after slips into a funk. That goes for official school meetings and for more casual digital hangouts with family and friends.

Zoom fatigue (or whatever your preferred video call platform) is a real issue for both adults and kids, which is, of course, a problem. Millions of children across the world are doing the bulk of their schooling online right now, a scenario that could well continue into the next academic year. But lots of them are feeling, just, meh about the whole thing.

Are your kids completely over Zoom? Here’s what that is all about — and what you can do to help them through it.

First, understand that they might just be really sad

I’ve noticed that my 5-year-old gets especially upset on the morning of his weekly full-class Google Hangout. It’s a sweet idea — they ask each other questions and sing some songs. Afterward he crashes, without fail. He’ll have a totally unrelated meltdown. Or pick a fight with his brother. Or just kind of sink into a crappy mood.

Educational experts say video calls can be a sudden reminder to kids of how different things are in their worlds right now. They might be navigating their new at-home routines pretty well at this point, but seeing their friends and their teacher virtually can quickly snap them out of it.

“They’re tired of not being able to see people face to face,” said Lee Scott, chairwoman of the educational advisory board at The Goddard School, a private early education provider. “It’s a reminder they can’t do that.” Scott added that video chat removes all of the spontaneity that’s such a hallmark of kid friendships, particularly for the younger set.

“In natural friendships, they think, ‘Oh, I’ll go over and say “hi” to so and so,’” Scott said. They can’t do that at all right now, and video calls can be a hard reminder of that change.

So don’t try to fix it

“Children have experienced a loss. This is really sad for them,” echoed Nermeen Dashoush, an assistant professor of early childhood education at Boston University and chief curriculum officer at MarcoPolo Learning. Don’t underestimate how difficult that is to cope with emotionally, she said.

Instead of trying to fix their sadness by setting up more online playdates, help give them the vocabulary they need to express their feelings — and be open to hearing about what they’re going through.

“I do think that sometimes as parents we try too much to try and make things better for our kids,” said Dashoush, herself a parent who added that she often does the same thing. “A lot of research says, though, that what really helps is trying to help kids identify their feelings.” Then be on the lookout for more pronounced withdrawal, which could be a sign your child is struggling with depression or anxiety.

Give them some control over when they have video calls

Different teachers, classrooms, schools and districts have different expectations for what remote learning looks like, and what kind of daily schedules they’re setting. But if your kid is really pushing back against Zoom, it might be time to just give them a break.

“I do think there needs to be a healthy mindset around all of this,” said Stephen Cochrane, an associate professor for the California School of Education at Alliant International University. “Parents shouldn’t be too fearful that their child is going to slip and fall behind.”

So cancel Zoom dates with friends and family for a few days, and talk to your kid’s teacher about what they’re experiencing in order to come up with some strategies that can give them the time and space they need, while also staying on top of their schoolwork. That might mean calling into school meet-ups when they need to, but then spacing out the rest of their work a bit more.

“Let them have a say in how they break things up,” said Scott. “Give them some choices about how and when they do schoolwork that is required.”

If your kid is getting bored on Zoom calls with friends and family, it can be really helpful to give them a specific thing they’re going to do or talk about ahead of time. Maybe you have them play games with a friend, or have them cook a favourite recipe, suggested Scott. An older friend or relative might enjoy reading your kid a book. Maybe it’s a virtual dance party.

And that’s not just for younger kids. Older children might enjoy watching a movie with their friends, and there are extensions and apps that they can use to make it more of a viewing party.

“Try and have a plan,” Scott said.

Remember, in a lot of ways this is even harder for kids than it is for adults

Adults had at least been following the Covid-19 news before everything shut down, but kids’ worlds changed in an instant.

“A lot of them went to school one day, and the next day it was just ... over,” said Dashoush. So be patient with them if they just don’t feel like hopping on another Zoom call. Be open with them (in a developmentally appropriate way, of course) about how this all feels for you emotionally, too. Acknowledge that this feels really forced for a lot of us.